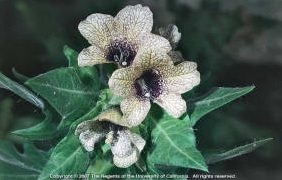 Black Henbane is a native of Europe that was introduced in the U.S. as an ornamental and now infests pastures, fencerows, roadsides and waste areas.

Leaves: Coarsely-toothed to shallowly lobed and hairy. Foliage has a foul odor.

Flowers: On long racemes in axils of upper leaves, brownish-yellow with a purple center and purple veins.

Other: Black henbane contains hyoscyamine and other alkaloids which have caused occasional livestock poisoning. However, the plant is usually not grazed by animals and is consumed only when more palatable forage is not available. Henbane alkaloids have been used in the past, and are currently used, as medicines at controlled dosages. It is considered a poisonous plant to humans.