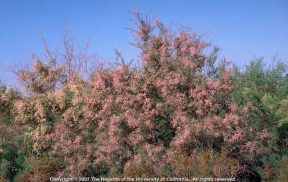 Saltcedar, also called tamarisk, was introduced from Eurasia and is now widespread in the U.S. Small flower tamarisk, similar in appearance, was also introduced from southern Europe and is also widespread. Both species are used as ornamentals but have invaded along streambanks, canals and reservoirs in much of the West.

Flowers: Pink to white, five-petaled and borne in fingerlike clusters.

Other: Each plant may produce up to 500,000 tiny seeds that are easily borne by the wind. Tamarisk seeds initially need moist habitat. More mature roots absorb large amounts of water and tend to dehydrate the soil.