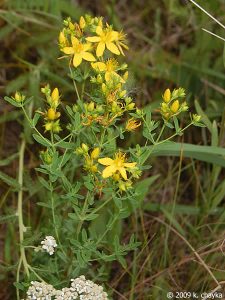 Originally from Europe, common St. Johnswort is a plant common to the Pacific coast but it is also present in Wyoming.

Leaves: Up to an inch long, the leaves are generally bright green and grow directly from the stem having no leaf stalk; oval with smooth edges, grow opposite on the stem and are covered with transparent dots.

Stems: About 1 to 3 feet high, erect, with numerous branches, somewhat two-ridged, rust-colored, woody at their base.

Other: Known for its medicinal uses; crowds out native forage and is toxic to livestock.