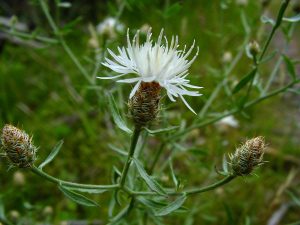 Diffuse knapweed was introduced to the U.S. from the Mediterranean region of Eurasia. It infests roadsides, waste areas and dry rangelands, and threatens to exclude many desirable species. It is a tough competitor on dry sites and rapidly invades and dominates disturbed areas.

Stem: Upright, single main stem from a rootstock, branched near or above the base.

Other: Reproduces only by seed. Each plant can produce about 18,000 seeds that are mostly spread as the plant breaks off at the base becoming a “tumbleweed.”